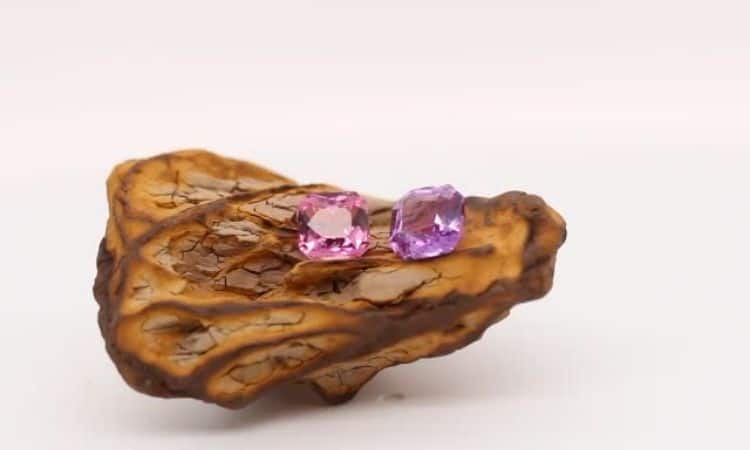 What makes Ceylon Sapphires different? Why should anyone place special emphasis on this variant of sapphire stone, determined by its country of origin? Ceylon (now Sri Lanka) is one of the major countries where natural sapphires are sourced from, and then supplied to jewellers and gem merchants across the world. And it has held the dominant position in the sapphire industry with Thailand, Burma and a number of African countries. In more recent times, with the entry of new players such as the United States and Australia into the sapphire market, things have started to change.

Here we will learn more about the distinguishing characteristics of sapphires that are mined from this particular region, and why they are worth considering for those who are in the market for this gemstone; or who are seeking sapphire jewellery, like engagement rings. Or for those who just wish to become more familiar with this special gemstone from an exotic part of the world.

What are Ceylon Sapphires?

Simply, Ceylon sapphires refer to the sapphire variant of the mineral corundum that is sourced from the Island nation of Sri Lanka. Sri Lanka, formerly known as Ceylon, was a colony of Great Britain, until its independence in 1948. The name change to Sri Lanka from Ceylon happened following its exit from the Dominion that recognized the Crown as the head of state. Despite the political and social changes that transpired in the aftermath of this change, the Island nation maintained its deep connection with its past. One that was touched by influences of European rule, Middle Eastern merchant trade, and their lingering heritage. So one may wonder why Ceylon, rather than Sri Lanka? One must understand that the name Ceylon, owing to its connection with the country’s rich history in the trade of gems, spices, rubber and other resources has remained.

The name Ceylon, despite its colonial heritage (or possibly because of it), maintains that deep connection with its mysterious past: one that stretches back thousands of years. One that applies, importantly in this discussion, to its history in the gem trade. The name Ceylon thus holds a magical connection to the country’s rich, eventful past. Where the trade in gems, spices and the myths that have been associated with it work into the uniqueness of sapphires from this part of the world. Much of this magic is captured in the name ‘Ceylon’. Today Ceylon or Sri Lanka is known for producing some of the best quality sapphires in the world.

A Country of Gems

The mining of gems and their trade has a long history in the island nation. As the origins of the gem trade go back over a thousand years, with the use of precious stones like sapphires being recognized for their value for a much longer period. The abundance of sapphires in Ceylon is due to its advantageous geological position, as a country is blessed with a vast region, proportion to its landmass, that is rich in mineral deposits, from which precious stones, like sapphires, are sourced. Many of the precious minerals are taken from the secondary alluvial deposits found around the highlands of the island. The gem mining fields-as they are known-in the Island cover an area that is nearly 1500 square km. The heart of the gem mining region is located in the Province of Sabaragamuwa, where the famous gem mining hot spot on the island, Ratnapura is found: A place that is literally referred to as the city of gems. A region that has become the top source of gemstones, like the famous blue sapphire, for the country.

In addition to the main gem mining regions, Ceylon, owing to the wide distribution of Precambrian rock formations, is home to a variety of precious stones in addition to sapphires: such as Moonstones and garnets and many of these gemstones are spread across the wet regions of the country. Did you know that of the 200 minerals that are classed as “precious”, 75 is found on the island? With places like Kandy, and Nuwara Eliya, Hatton has its own smaller gem mining and trade operations, thus adding to the wide diversity of regional sapphire gemstone sources. 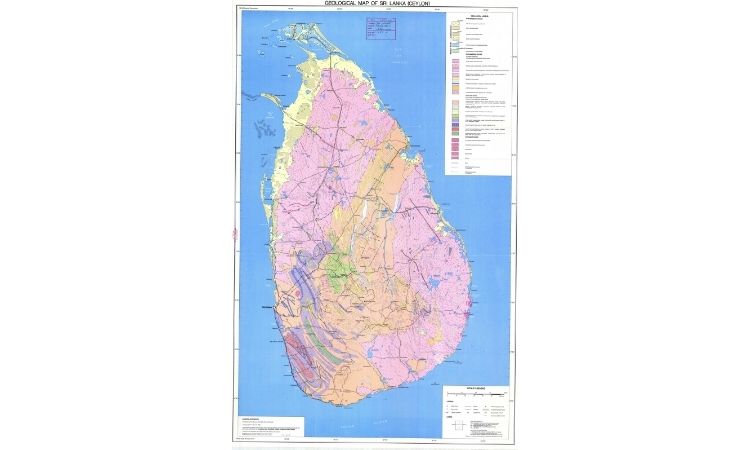 When one speaks of sapphire types there is the tendency to view their varieties almost solely from the standpoint of colour. The famous blue sapphires as we all know are often associated with the island of gems. Certain varieties of green sapphires that have been unearthed in recent times in parts of the world like Australia and the United States are being given an associate national distinction. When it comes to sapphires from Ceylon a certain pedigree exists when it comes to the type of gemstones of this variant that is aligned with this part of the world. Whilst the varieties of sapphires listed here are not unique to the Island nation, Ceylon as a global sapphire hub: owing to its considerable resource strength, strong supply and respected gem mining and jewellery making history has come to be the leader in provisioning these notable sapphire types:

Arguably the most popular blue sapphire variety, Royal Blue sapphires, as their name indicates are gemstones of nobility. The main distinction of the Royal Blue sapphire is its colour: which is of a strong shade of deep blue, but not dark in colour. For it maintains a lustrous glow that powerfully reflects light, with a relatively higher degree of clarity for its darker shade of blue. When it comes to picking a quality Royal Blue sapphire it is important to note that there is no one single colour. Sapphire colour types, even within a certain colour range, like blue, fall in a continuum. So the Royal blue range of blue sapphire comes in a group of colours that share similar colour tones, with subtle but significant differences. When it comes to the Ceylon variety of Royal Blue sapphires the key advantage is the level of choice. For, unlike other markets which too might provide a Royal Blue option, in Ceylon, owing to the relative abundance of this type of gemstone, is the ability of the potential buyer to select quality Royal Blue gemstones. Hence if one is in the market for Royal Blue sapphires seeking a country of origin would help.

Into this vacuum enters the quality of Ceylon sapphires. As a country with a near limitless supply of sapphires (and other precious gems), Ceylon should be the go-to choice when it comes to selecting quality Cornflower blue sapphires. Given the abundance of stones, not only is there a greater choice of stones, but if you find the right jeweller, the prices are likely to be more competitive. Further, as in the Royal Blue variant, Cornflower blue sapphires also fall in a colour range: with a number of Cornflower blue variants coming with a slight purplish tone. Again, the key is the presence of choice. When you are faced with a number of options your ability to make your pick is simplified.

Considered by some to be the ‘King of Sapphires’, Padparadscha sapphires are a distinct variety of pink coloured sapphires, that contain elements of an orangish tone. But not too much of either colour that uniquely combines in a pleasant shade that resembles the colour of the national flower, the louts, particular a special variety of the lotus flower, that has the colour that represents a light shade of pink and that of a setting sun. The Padparadscha is considered highly valuable due to its rarity; the colour of this variant of the gemstone is desirable for it contains shades of pink and orange, and is found only in Ceylon. Until quite recently, certain variants of the Padparadscha sapphire were found in parts of Madagascar and Tanzania. This is an area of dispute, with some gemological experts believing that the Ceylon version of the Padparadscha sapphire is the most authentic. Simply, if you are in the market for a top-quality Padparadscha sapphire, the Ceylon variant ought to be your preferred country of origin.

What Makes Ceylon Sapphires Different from the rest?

This is where things get interesting. For a start, all sapphires in the world carry the same mineral character. Sapphires are formed from the mineral corundum, which is then cut, shaped, polished and made into gemstones, which become stones for fine jewellery items. First, we need to understand that when it comes to Ceylon sapphires, we are talking about naturally sourced gemstone. Not those which are grown in labs. As the synthetic version of these gemstones has begun to enter the market in recent years, these have raised questions on the significance of natural sapphires. Further, what does this mean when it comes to the unique value of Ceylon sapphires?

Enter the 6Cs of Sapphires

For those who have been in the market for diamonds: either the gemstones or as a part of a fine jewellery item; or have taken the time to learn about the determinants of diamond quality, would have some idea of the 4Cs of Diamonds. The importance of understanding the Colour, Clarity, Cut and Carat in determining the price of the precious gemstone is often emphasised by jewellery and diamond merchants. When it comes to the world of sapphires, however, there is no official gemstone quality measure that is widely recognized. We at Brilliyond have devised a framework for understanding and determining the value of sapphires: The 6Cs of Sapphires. Taking the main lessons from the 4Cs of diamonds, and then refining them to meet the unique and variegated qualities of sapphires. The 6Cs of sapphires incorporates the Colour, Clarity, Cut, Carat and then combines them with Country and Curing. To learn more, why not check out our Education pages on the 6Cs of sapphires.

An Environmentally and Worker Friendly Gemstone

In an era where there is growing awareness and consideration when it comes to environmental conservation and the well being of workers, particularly in developing parts of the world. Ceylon (Sri Lank) is one such destination where great emphasis is placed on the protection of the natural environment and the economic and social health of those who are employed in the industry. When it comes to Ceylon sapphires, and any gemstones that come from this part of the world, it is important to understand the wider culture within which sapphire mining, trade and jewellery making take place. Sri Lanka, as a country with a Buddhist heritage, places great emphasis on life, particularly non-human life.

Sri Lanka is a country that has taken strong measures in protecting the natural environment, with dedicated regulations in place to safeguard nature. Importantly successive governments have made dedicated efforts to ensure that the gem and mineral mining industry works in a way to ensure the health of the natural environment. Further sapphire mining process as noted works into a broader culture of how sapphires are mined, cleaned, polished and marketed. And each of these steps takes place within the wider community that ties these aspects of the sapphire trade in Ceylon. To learn more, check out our Education pages on Sapphire mining. With Ceylon sapphire, you are getting a wider range of quality, graded natural sapphires.

What I can help you with today?